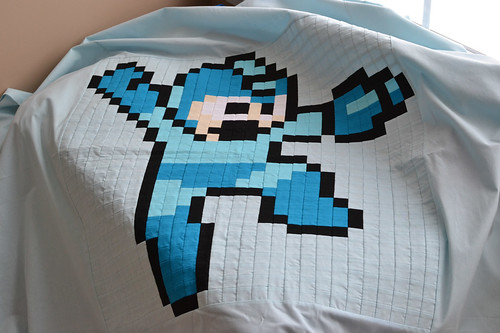 I’m one of those people that needs to make things start to finish. I know most people have lots of UFO’s (unfinished objects) around, but I definitely like to start and finish a project. I have a process – I measure and cut, fuse if necessary, construct and then totally clean up my workspace and start over again. This works great for purses and small projects, and the first quilt I made I finished in a weekend. But this quilt was a lot more than a weekend project!

My original idea was to make something from Mario Bros, like the 1up mushroom, which is 16×16. I found gridded interfacing at the LQS and thought it would be a great way to use a quick piecing method to assemble it. I talked to my brother and we decided instead on jumping MegaMan, which is 29×30 pixels, and sleeping MegaMan, which is 29×12. We picked out colors and he showed me the layout he wanted. Rather than a big image the size of the whole quilt, he wanted a smaller image in the middle. I did all the math and figured out how big the borders and squares needed to be for a 60″ x 70″ finished quilt. I counted up how many squares of each color (over 1000 total for the front and back) and figured out how many strips and squares to cut of each. (Math is fun!) We had decided on 1.5″ squares for a 1″ finished square, so I cut 1.5″ strips and then sliced those strips into squares. I very carefully kept the grains aligned while placing them. I had blown up the images really big and printed them out so I had a guide to follow. 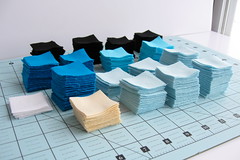 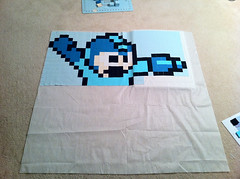 Oh how I thought this would be easy! Instead it really turned into a learning experience. I got the pieces fused, but the grid that I had was for 2″ squares so they only lined up every 6 squares. I did my best to keep them straight, but when sewing the only way to do it was to actually measure 1″ from the next seam – stopping every 6 inches or so to measure. I couldn’t rely on just the seam allowance. Oh the seam allowances! Ugh. Pressing them open was extremely difficult because they were so close together. Slicing off the interfacing was easy, but opening the seams got so much gunk all over my iron it was a good thing that I had iron cleaner handy. A press cloth was pretty much useless. In the end I decided all the seams had to go to the side. This helped line up the squares better in the end, but it added a ton of bulk in one corner of each square. 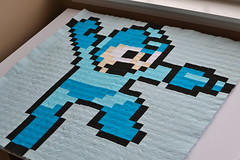 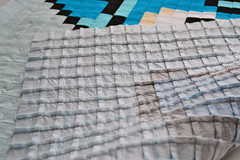 Next I made the sleepy guy. I decided to make him smaller, with 1.25″ pieces for a 3/4″ finished square. This time, I drew lines on the lightest weight fusible I had in my closet. MUCH better. It was easier to split open and press, so this time seams got pressed open. I figured this would reduce bulk in the middle where there was decoration on both sides. 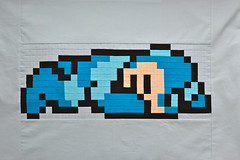 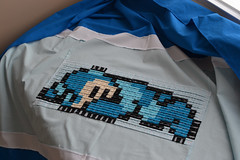 By this point we are four weeks into the project, but the end is in sight!

So now I had two pixel sprite images that needed borders. Somehow, amazingly, it worked out to the exact amount of fabric I had on hand. Again, math is fun! The borders sewed up quickly and it was time to baste. Since my first quilt was 35’x45′, this was a bit harder. I bought the specialty curved pins and moved my couch out of the way and taped the thing to the floor. 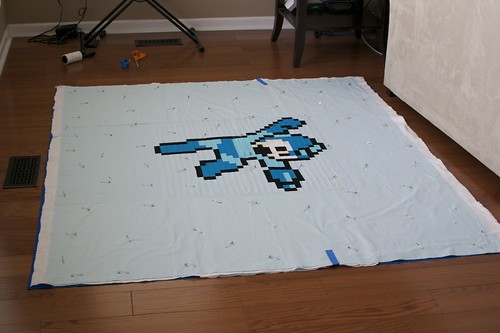 To quilt, I moved my sewing machine to my kitchen table. My LQS had those awesome Machingers quilting gloves with the rubber fingers, so I splurged. They seriously saved me! My concern was the bulk of the quilt, but it was no trouble at all even with my baby Bernina. The problem was with the uneven seams in the bulk of the decoration. It would sometimes get stuck and take several tiny stitches unless I pulled it through. Even guiding it, as it hit those bumps the quilt would shift. It helped to go slowly, but even with my walking foot my machine had trouble when I had to stop (needle down!) to get a better grip and the needle would jump a little bit on the next stitch. I think once it’s washed it will be less noticeable. Once I realized what it was doing I tried really hard to keep a firm grip on it and guide it through. 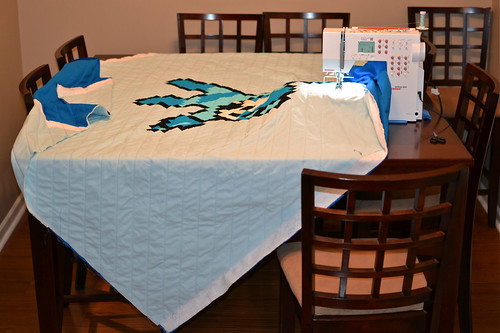 I’m hand sewing the binding this afternoon and then I will post completed pics. It feels so good to have a month long project completed. I posted pictures to Flickr! along they way and they are all in the MegaMan set.

If I do this again, I will skip the image on the back side. We wanted it to look like the end screen in the game and I think sleepy MegaMan is adorable, but quilting it with a design on the front and back isn’t worth repeating. I would also stick to the 16×16 images and possibly eliminate the interfacing and do it the old fashioned way. Any time saved sewing was spent ironing. There is no way I would attempt 1.5″ or smaller squares without interfacing, but 2″ or larger could be done. I would also use Bella instead of Kona. I will wash it with fabric softener before I mail it to my brother, but I’m not thrilled with the lack of softness of the Kona. Maybe the fabric softener will help. I will report back!

Click here to cancel reply.
Dog Under My Desk
Copyright © 2022 All Rights Reserved
iThemes Builder by iThemes
Powered by WordPress